Be wealthy like Warren Buffet by investing just 220 buck per month !!! 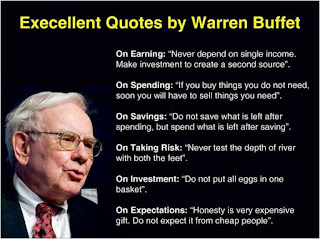 We all dream to be wealthy like Warren buffet, rather fact is most of us would have never ever dreamt of being as wealthy as him. But is it that difficult to be as rich as warren buffet.


I tried to evaluate and did certain calculation of what actually made warren buffet one of the wealthiest person in the world.

“I never attempt to make money on the stock market. I buy on the assumption that they could close the market the next day and not reopen it for ten years.”

2) Start Early : He made his first investment at the age of 11 and still regrets that he started late.

3) Discipline : He has been an investor since he made his first investment.

5) Expenses : He still lives in 3 bed room house in omaha bought 57 years back . He drives his own car.Although he owns worlds largest jet company but never flies by a private jet.He also doesn't carry a cell phone. He believes :

" If today you buy things you do not need, soon you will have to sell things you need".

With all the above qualities, let's understand how any of us can create wealth like Mr.Buffet.

Increase in rate of Investment : @10%

That means if someone starts at age of 11 with just USD.220 per month increasing it 10% every year and compounding it @22% can accumulate such wealth. Is it that difficult?

The toughest task here is to compound your investment@22%/p.a. for such a long period.

But luckily we have some of the Equity Mutual fund which gave return @24% annualised, during last 20 years of its existence. So even if you are not having stock picking knowledge of Warren Buffet, you have easier way available to be wealthy like him.

Will conclude with one of his best words of wisdom :

"If you are luckiest 1 percent of humanity, you owe it to the rest of the humanity to think about the other 99%.

You would be surprised to note that his children will not inherit a significant proportion of his wealth, he has pledged 99% of his wealth to charity and already donated US$25.5 Billion.
Posted by Raj Talati - ABM Investment at 11:30 AM