What is Systematic Invetment Plan - SIP 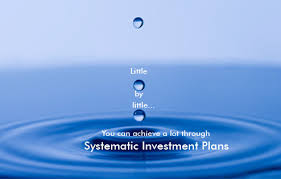 Systematic Investment Plan (SIP) is not an asset class in itself, it is an option that will help you to accumulate money. In simpler terms you may say it is an recurring deposit in mutual fund.

What is a Systematic Investment Plan?

A Systematic Investment Plan or SIP is a smart and hassle free mode for investing money in mutual funds. SIP allows you to invest a certain pre-determined amount at a regular interval (weekly, monthly, quarterly, etc.). A SIP is a planned approach towards investments and helps you inculcate the habit of saving and building wealth for the future.

How does it work?

A SIP is a flexible and easy investment plan. Your money is auto-debited from your bank account and invested into a specific mutual fund scheme.You are allocated certain number of units based on the ongoing market rate (called NAV or net asset value) for the day.

Every time you invest money, additional units of the scheme are purchased at the market rate and added to your account. Hence, units are bought at different rates and investors benefit from Rupee-Cost Averaging and the Power of Compounding.

With volatile markets, most investors remain skeptical about the best time to invest and try to 'time' their entry into the market. Rupee-cost averaging allows you to opt out of the guessing game. Since you are a regular investor,your money fetches more units when the price is low and lesser when the price is high. During volatile period, it may allow you to achieve a lower average cost per unit.

Albert Einstein once said, "Compound interest is the eighth wonder of the world. He who understands it, earns it... he who doesn't... pays it." The rule for compounding is simple - the sooner you start investing, the more time your money has to grow.

However, if you started investing 10 years earlier, your Rs. 10000 each month would add up to Rs. 36 lakh over 30 years. Assuming the same average annual growth of 7%, you would have Rs. 1.22 Cr on your 60th birthday - more than double the amount you would have received if you had started ten years later!

Other Benefits of Systematic Investment Plans

· Disciplined Saving - Discipline is the key to successful investments. When you invest through SIP, you commit yourself to save regularly. Every investment is a step towards attaining your financial objectives.

· Flexibility - While it is advisable to continue SIP investments with a long-term perspective, there is no compulsion. Investors can discontinue the plan at any time. One can also increase/ decrease the amount being invested.

· Long-Term Gains - Due to rupee-cost averaging and the power of compounding SIPs have the potential to deliver attractive returns over a long investment horizon.

· Convenience - SIP is a hassle-free mode of investment. You can issue a standing instruction to your bank to facilitate auto-debits from your bank account.

SIPs have proved to be an ideal mode of investment for retail investors who do not have the resources to pursue active investments. Specially in equity funds as investors tend to stop fresh investment during bearish phase but SIP helps you to overcome that emotion as it is getting deducted every month directly from your account irrespective of market conditions.

So keep SIPing it will create a big wealth for you in long term.
Posted by Raj Talati - ABM Investment at 6:17 PM No comments:

We all are aware that Greece is in deep trouble after defaulting on its debt to the International Monetary Fund.
The Greek economy is shrinking.At such time one of the tool available government is to tinker with the currency. Unfortunately Greeks cannot do so because they share their currency with other nations of the Euro Region.

To Understand their predicament one needs to imagine Euro Zone as a train.

Now imagine various countries as the bogies (compartments) of the train and let's say train is trudging along smoothly and all seems well.

Suddenly, few of the passengers in the "Greece" bogie fall sick, so they send a request to the engine driver, via a telecommunication system fitted in the bogie, to speed up. They need to reach their destination fast as they are feeling unwell.

The engine driver sends a message to all other bogies that they have received a "speed up" request from the Greeks due to an emergency.
On hearing this announcement. the German passengers seated in the German bogie take serious objection. They want to enjoy journey at leisurely pace and vehemently object to "speed up" suggestion.

Their contention being that they had paid a premium for enjoying this leisurely journey and were not prepared to get short changed.

They caution the engine driver that if he were to "speed up". then they would demand a refund.

The engine driver find him in an "impossible" situation is left with no choice but to maintain status quo . The Greeks are left with no choice but to suffer their ordeal.
One of the Greeks regrets his decision to travel by train. He feels has they travel by their own car, the decision of speeding up would have been theirs. But now since they are a part of the train, they can do little to influence its speed.

These countries are facing a slowdown and need to revive their economy. One of the best ways to do that is to sell more products to the world and reduce debt. And in order to do that, it is vital do devalue currency like we did in 1991.

But since the currency (Euro) is common for all the countries, just a handful countries cannot  decide about changing the valuation of the EURO all be themselves.

This is just like how the Greeks in the Euro train failed to "Speed up" the train. For countries like Germany and France who are not in a "debt" problems like the Greeks, a reduction in the value of the Euro works against their interest because it unnecessarily makes their imports more expensive and prices of commodities in general increases.

Basically tinkering of the currency works on the opposite way for two sets of countries. Had Greece own their currency, they would have easily devalued their currency to make exports more attractive.

This would have boosted their economy by creating demand and thereby jobs. This would be like having to travel in their own car instead of being part of a larger train.

Digital India - What is Digital Locker

Inside India's Digital Locker: What Is DIGILocker and How Does It Work? 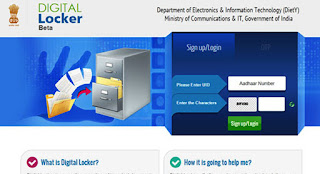 Between your wallet and that locker in your house where you keep things safe (in theory; in practice you forget to put things in there safely, and then have a panic attack as you desperately search everywhere for your missing passport), how many government documents do you think you have? A quick check shows that there are several at hand - an Aadhaar card, a driver's license, voter ID, PAN card, all in the wallet, and a passport at home. Then there's old income tax returns, property tax receipts, and educational certificates from school and college, all kept "safely" archived for when they're needed.
That's a huge number of documents to keep and manage, and the government also seems to have taken notice. As part of Digital India week on Wednesday, Prime Minister Narendra Modi officially launched a digital locker service called DIGILocker, though the service was soft-launched sometime back.
So what exactly is DIGILocker? Very simply, it's a website where you can store your various government issued documents, using your Aadhaar card as your identification. While it hasn't been stated as such, to us, it also looks like a good way of bringing data from different government agencies together under the aegis of the Aadhaar card, potentially making the document more useful to people carrying it.
To sign up, you need only enter your Aadhaar number, and an SMS is set out to the mobile phone number you registered at the enrolment camp. This one-time-password is the only way to get inside your DIGILocker for the first time, but afterwards, you can set your own password or link the DIGILocker to your Google or Facebook login.
After you've signed up, you can upload your government documents to the DIGILocker - there's only 10MB of storage at present - but you can also save the Uniform Resource Identifiers (URIs) of government documents using DIGILocker. 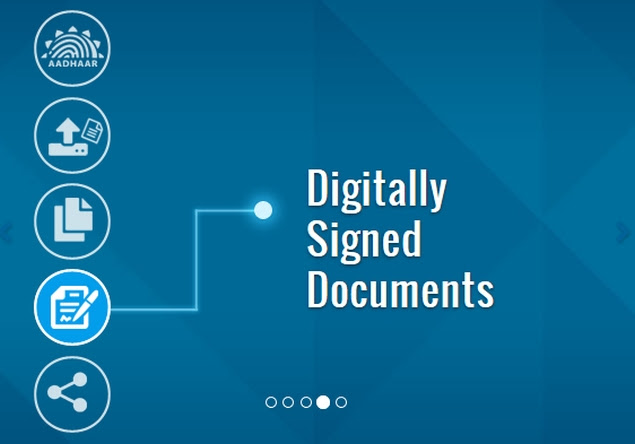 The idea is that this should minimise the need for physical documents; if your birth and education certificates are online, and you apply for a passport, then the Passport Office could use your Aadhaar number to request the DIGILocker for your details, without needing you to carry a large file of documents for the application.
Or, the RTO could issue your Driver's License directly to your DIGILocker, based on your Aadhaar information alone; this way, if you need to send your new license to any agency as verification, you'll have an online, authenticated version available whenever you need it.
There's also a planned e-Signature facility with DIGILocker, though that will be launched later; between digital signatures and government documents in the cloud, it is clear that the government wants to make it easier for people to use government services online. Today, getting almost anything done with the government requires you to produce ID documents, which requires a visit to the government offices. Few, if any, government branches allow you to mail a copy of your documents - which actually makes sense for security reasons - but DIGILocker will be a way to authentically curate your documents, and make it easy to share them to different departments.
There's also the question of external threats. While the DIGILocker website looks to have the basics in place by using HTTPS (the same protocol that your bank uses to secure communication between your computer and their servers) for the main part of the website, you have to wonder how secure the backend is. You can be pretty sure that a place where everyone is keeping their official documents will be a target for hackers foreign and local.
Right now, there's not too many ways in which DIGILocker is useful, but it's a clear signpost to the direction we're moving in. Some people worry that this much centralised data could lead to misuse, and also warn of the potential of small mistakes in documents now creating much bigger problems than before, but there's no denying that the convenience of having all our documents digitally accessible and easily shared to different government departments when needed is very appealing.
To access your digital locker, visit DIGILocker and you can sign up now for free with your Aadhaar details.

Posted by Raj Talati - ABM Investment at 9:38 AM No comments: